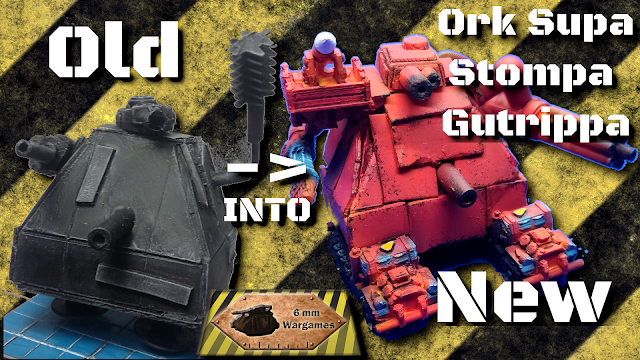 A long time ago (over 4 years since this post publishing to be exact) I created a pair a scratch build Supa Stompas. 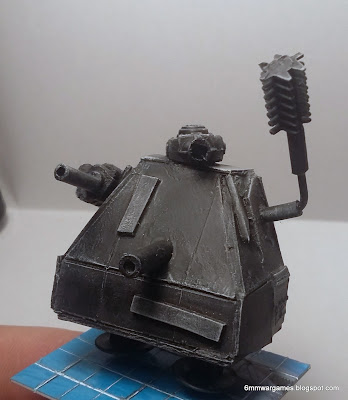 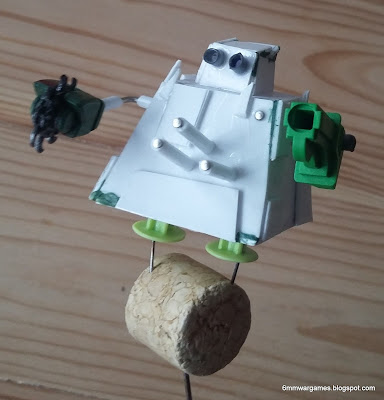 I was very happy with them and used them on a few occasions but after some time I upped my game and put them away thinking that I will come back to them someday. That and the fact that I switched to playing Imperial Guard almost entirely made me forget about them. 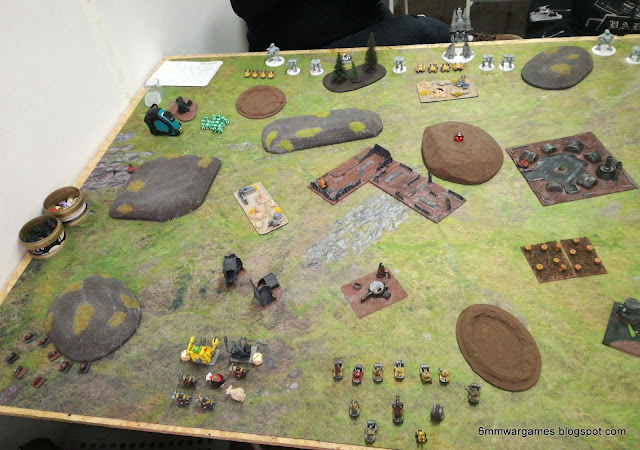 After a long time, the day had finally come. I wanted to try a different army for one 'away' game and decided to use my Orks with a Supa Stompa.
I pulled them both out of the box and thought: "damn you are not as good as I remembered". 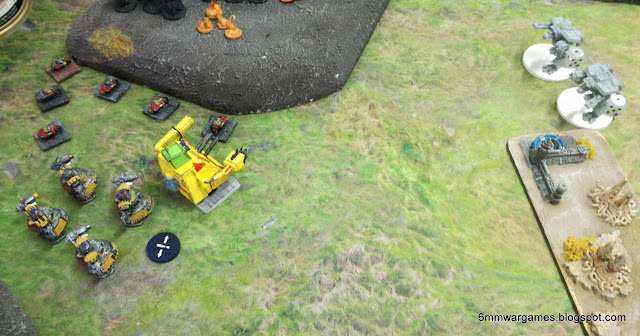 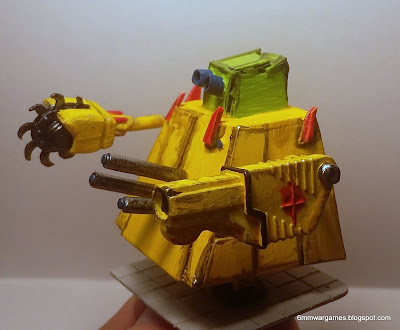 It's easy (even for me) to look at them now and go 'damn this looks really bad' but that would be unfair. I was not born with maxed out scratch build skills, they grew (and are still growing) over time. Only by doing can you increase your skills!
As for painting, let me just add that prior to having an airbrush I hated painting. It was the worst part of the hobby for me. Now when basecoting a single tank does not take so much time that it feels like hours I started to enjoy it.
I decided to upgrade the black Stompa as it was the least appealing of the two. 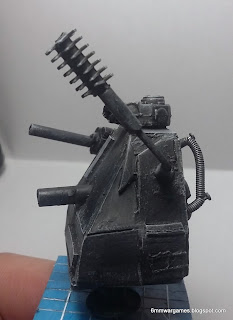 I try not to throw away my hand made creations since there is a lot of sentiment connected with them (there are some exceptions to this rule!). With that in mind (and a general feeling of wanting to preserve its original flavour) and a goal to arm it with weapons that actually fit its roster, I started my work.
Work is quite a big word because I simply took all the 3D printed parts I had and simply started bashing them together. Typical for me, no greater plan in mind, just go with the flow.
The first things to go (from the original model) were the hands and head. They were way too small for the body they were attached to. I felt that the head is one of the defining elements of this construction, and the unit itself has a gaze of Mork titan killer gun which sounds like a head-mounted weapon so I knew it had to be sone kind of cannon
I was also thinking about dropping the 'belly gun' (not a big fan of those) but it was glued so firmly that I had no choice but to leave it as is.
The other weapons in the roster were two integrated Soopa Blast Guns and one switchable, either a third Soopa Blasta gun or some kind of gun/axe weapon. That meant that  I had to have an arm that could be replaced so here come the magnets!
I had some 40k bitz which I purchased here and there, for builds like these but decided not to use them.
For one they are way too detailed, giving the overall mini islands that are super detailed and the mundane ocean of the rest.
Two, for some reason (that is unknown to me) I seem to have an allergy to 40k bitz?
Almost everything that uses them seems to get that 40k look.
It should not be a problem in this case since that's the game I'm going with! But for some reason, I decided that nothing fits and opted to go for the proven design of a big minigun. Easy to scratch build with some plastic tubing and other plastic bitz.
Don't get me wrong, I love when other people use original 40k bitz, or when minis are kitbashed, but in my workshop when I scratch build I tend to keep those bitz off.
The construction phase ended up looking something like this 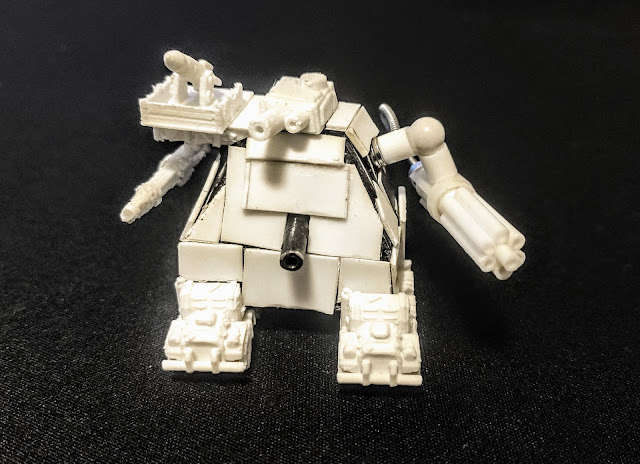 As you can see the original torso is visible, but covered in new plates of armour to give it a much more Orky look. I was thinking about adding rivets but after coming to a grinding halt with a Gaslands War Rig project due to rivets I passed. 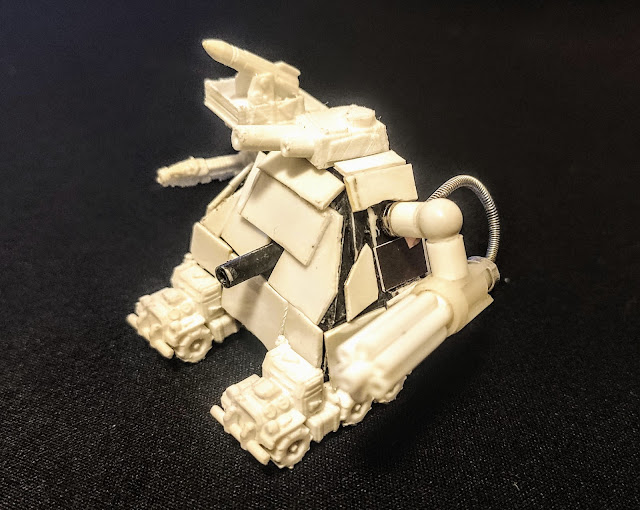 I've added a piece of guitar string to the minigun arm. Originally I intended to connect it to the back since it's a bit empty but that would not allow for weapon swapping so it had to go with another point on the arm itself. 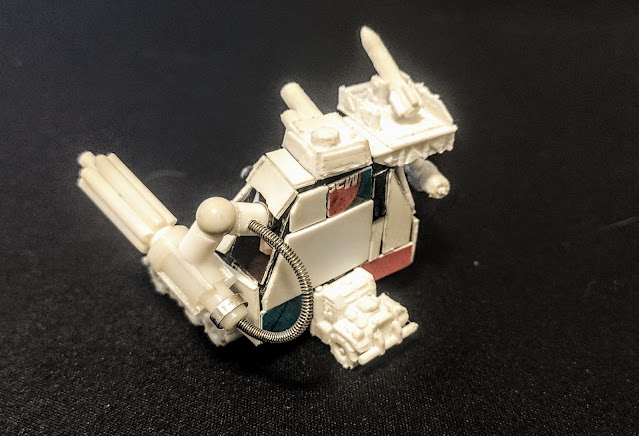 The shoulder-mounted missile is from a manticore model, the plasma arm is from a knight model. The shoulder itself is made out of two misprinted Gunwagon platforms. You can see the same Gunwagons used as the feet(?). 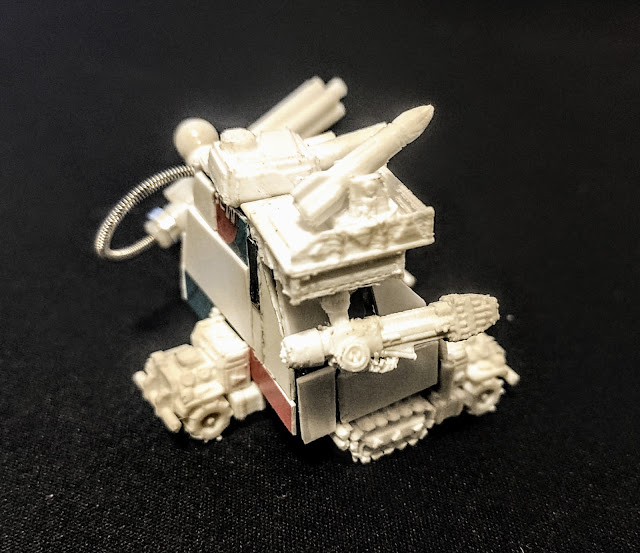 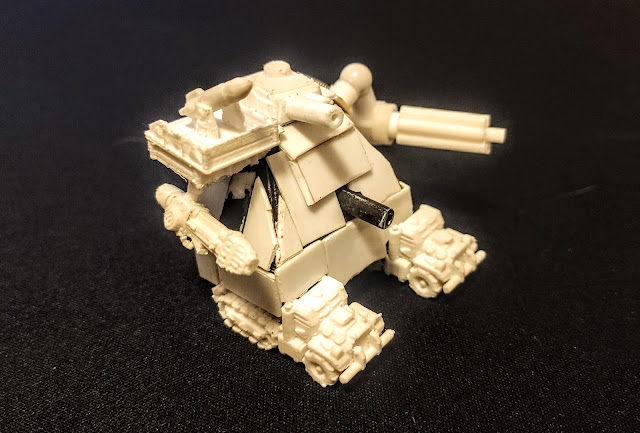 The finished construction is a little bit modified, in these pictures you can clearly see that all of the armour plate edges are straight, I decided to change that and cut off bits and pieces here and there to give it a more used up/damaged look 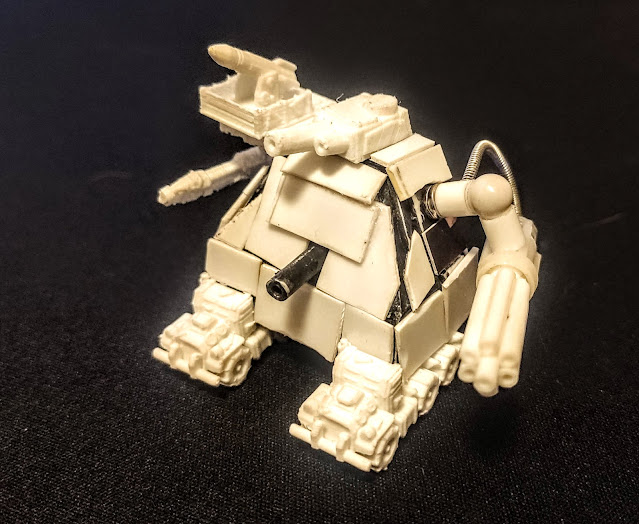 The almost end result (after some damn good painting) looks like this: 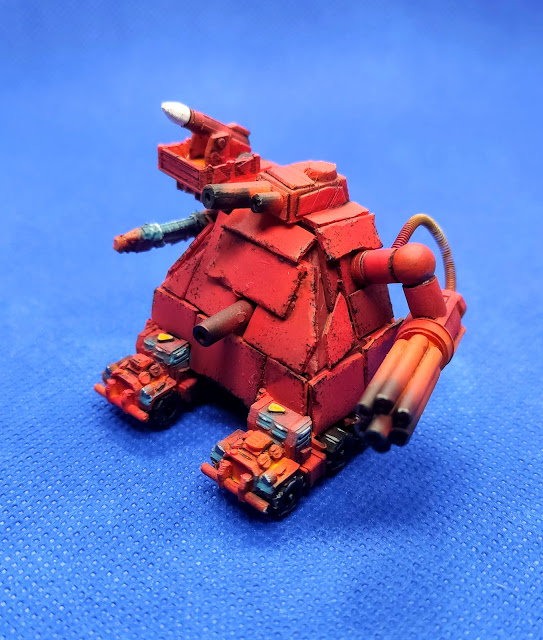 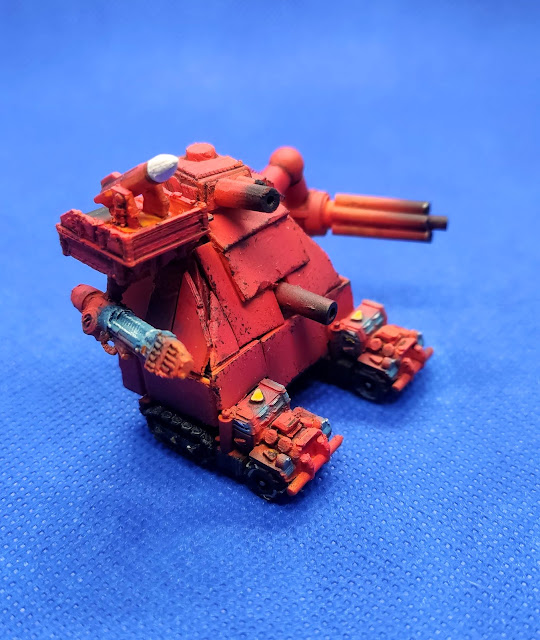 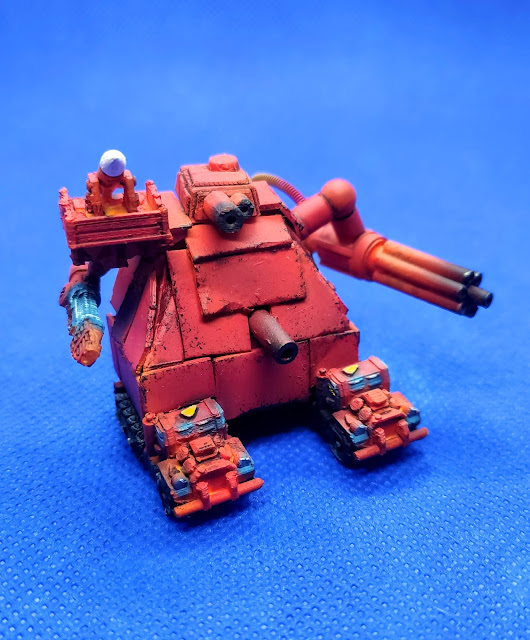 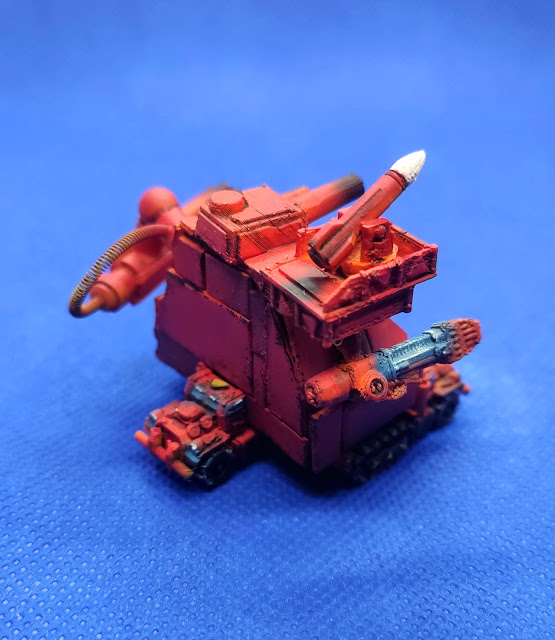 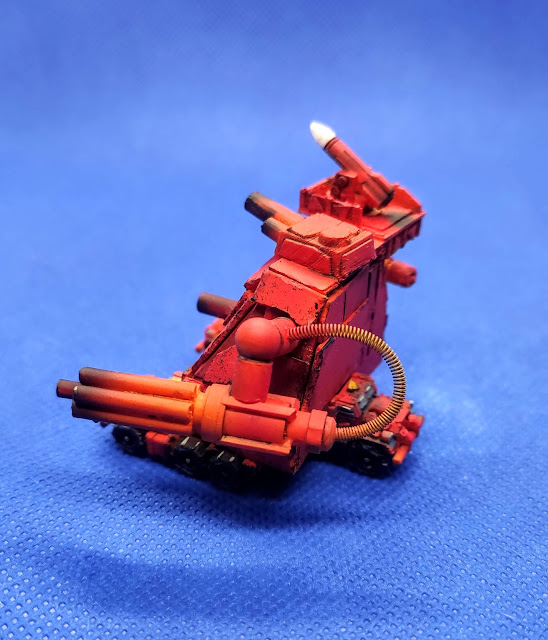 Why almost finished? I want to break up the red some more on the middle/top sections but am not a huge fan of adding glyphs and checkers. Will leave it for now and maybe come back to it later.
To say that I'm happy with the result would be a huge understatement!
Ecstatic is more appropriate in this case.
How to paint:

Airbrush:
Reds:
Glowing blue
Black on muzzles/tires/threads
Brush:
White and yellow parts undercoated with Vallejo Medium Sea Grey.
Yellow
Threads were coated with Vallejo Gunmetal Metal while wheels had some elements pointed out with Vallejo Medium Sea Grey to make them non-black blobs.
All of this was finished up by a lot of panel washing with AK blue-black panel wash.
And as a final touch, I applied some corrosion/dirt on all armour panel edges using a piece of ripped sponge and GW Warplock Bronze.
It was a LOT of fun, hope to repeat this process in the future with another one of my old models!
What do you think about this creation?
Any suggestions about breaking up the red, maybe I'm overreacting and it looks good as is?
Leave your thoughts in the comments below!
3D 6mm Epic Armageddon Ork Scratch build
Location: Łódź, Polska

News from the last 30 days: 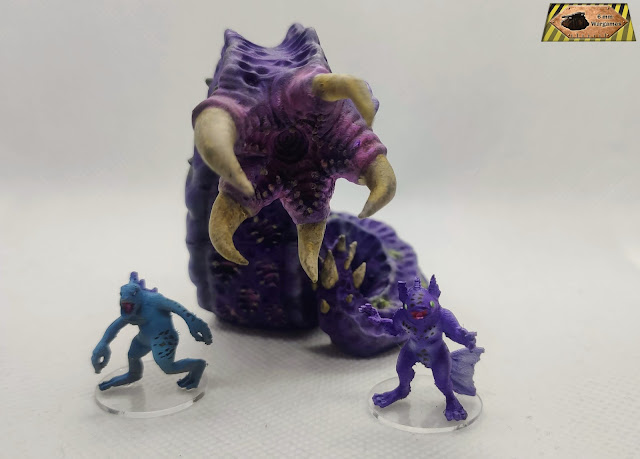 Perilous Tales motivated me to invest in some horror /Lovecraftian miniatures to increase the number of available opponents. It's a great system in that regard since I only need 5-8 "bad guy" miniatures (this can scale up to 10ish some times in some rare occasions but could be hard capped at 5 if you so desire).
The first ones on my list were the Deep ones and Mother Hydra!
Deep one: https://www.thingiverse.com/thing:2885464 It was scaled down to ~18 mm in height

Had more than a few issues with these models. The hands were a hard thing to print. In the end, I fixed up some hands from green stuff and the failed prints. Not the best work I ever did but since they are probably going to be used once I did not want to spend too much time on them.
The painting scheme is "fishy" airbrushed light green-brown from the bottom and dark blue from the top to make an interesting transition. The skin was next highlighted with a light blue and dotted with some brown/copper dots to … 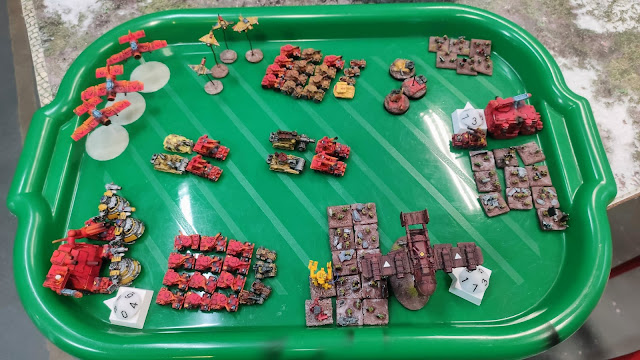 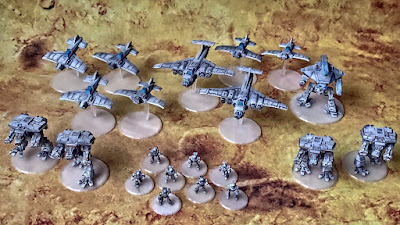 Just a short introduction, this report was supposed to be a video unfortunately due to technical issues it is not. This version is based on the few pictures that I took during the game
We decided to say goodbye to 2019 with a big bang playing a mega Epic Armageddon battle. Details regarding army build were already published earlier if you are interested in those take a look at the previous post.
Because the assumption was to end the year with a big bang I posted a pool on Facebook what kind of army should I play. Most of you decided that I should take a surprise army (which was on my mind for a very long time) meaning the Adeptus Mechanicus Titan Legions.
I will be fielding them using the Epic UK list since the house Gryphonicus has some flaws that I did not like at the time. Below are all of the units that I needed to print and paint in the few days before the game.
1 Reaver Titan 4 Warhound Titans 8 Robots 6 Thunderbolt Fighters
2 Marauder Bombers
Quite a lot of printing and not that much t…